Unlike other cities in the US and Canada that have banned activities such as tobogganing because of insurance costs, Edmonton has no such laws.

Now the city is considering flooding an 11km route for residents to commute through the city on skates.

It's called the Freezeway. Organisers are planning a pilot project for as early as next winter.

The premise first came about years ago, as an offhand comment from a civic leader with an environmental bent.

"Why don't we just crack the fire hydrants open, flood the streets and let people skate to work in the winter?" teased city councillor Tooker Gomberg, in the 1990s. 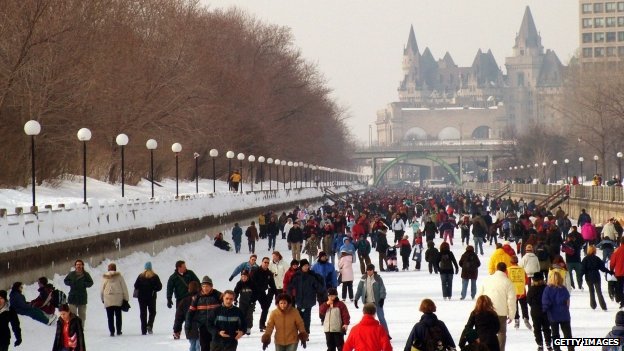 Landscape architecture student Matthew Gibbs, who grew up in Edmonton, pondered the flippant idea, and built a very real design - winning him first place in the 2013 COLDSCAPES international design competition and the attention of city planners.

Researching the landscape for his master's thesis, Mr Gibbs looked to two old existing rail corridors, flat stretches of land that lead in the direction of Edmonton's downtown core. The land is currently used as a multi-purpose trail that runs along the tracks.

"I found if we bridged these together, we could create a unified 11km route that people could skate on - potentially to work, to school or to the hockey game," said Mr Gibbs.

I am not in any way suggesting we do this with the Beacon Line, but obviously if we could have some use, any use, for that line, Beacon will benefit immensely.

We pay this punitive, abusive Dutchess County payroll tax to the MTA. They use the line to run one test train on it every few years. What is the MTA? The NSA? The Secret Service? They are "A public benefit corporation chartered by the State of New York." And yet dealing with them is like dealing with an arrogant, unaccountable secret society that operates with impunity. Time for some comeuppance. We need to use the Beacon Line, and we deserve to, and the MTA will help us do that.

Replies to This Discussion

Hasn't it been at least 10 years since a train was on the Beacon extension?

I always though it odd that businesses in a suburb of a large city would pay a tax for people who commute AWAY from the suburb to the large city!  That's like people having to pay for tax on food at a restaurant they don't go to!

Subsidizing absurdly long commutes is a bit on the crazy side--as Steve notes, it is pretty self-destructive.  I'd add that it is wasteful of resources and essentially turns our Hudson River waterfront into a parking lot for Manhattan.