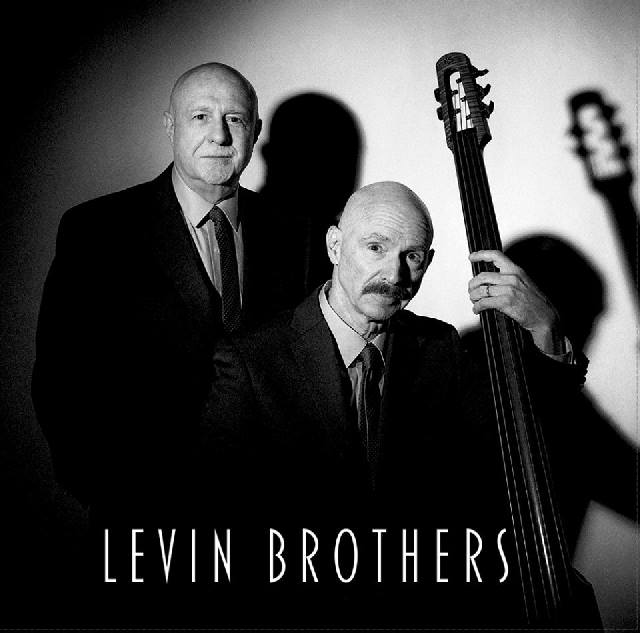 http://www.thelevinbrothers.com/
"This album's about a few things. A long overdue 'first record' by two brothers who've been making records individually for ... well, a lot of years! It's a return home to the music we first shared as kids - the 'cool jazz' of the 50's."
Growing up in a Boston suburb, the Levin Brothers, Tony & Pete, were trained in classical music, but loved the 1950s recordings by jazz bassist Oscar Pettiford and French Horn jazz player Julius Watkins. Catchy melodies, deep grooves and tight solos made that music memorable, and continued to influence them long after they'd moved on to other playing.  It's been percolating for years for them to do an album of their own in that style.  Now, with Erik Lawrence and Jeff "Siege" Siegel, they're continuing their Northeast US tour with a rare appearance in their very own Hudson Valley, celebrating their 2014 album release "LEVIN BROTHERS" on Lazybones Records.
The project is about a few things. It's a long overdue 'first record' by two brothers who've been making records individually and for other artists for ... well, a lot of years!  And it's a return home to the music they first shared as kids, the 'cool jazz' of the '50s.  It's been a labor of love to compose and perform in that style, and find the chemistry of musicians who play like ... like brothers!  See those suits in session and live gig photos? It's immersion in the musical genre!
Tony Levin
Since graduating from the Eastman School of music, Tony has become the bass and Chapman Stick voice for Peter Gabriel and King Crimson. In addition, he has played on notable recordings for John Lennon, Pink Floyd, Lou Reed, Alice Cooper, Dire Straits, Carly Simon, Judy Collins, and many others. Tony has major jazz credentials, having worked with Buddy Rich, Steps Ahead, L'Image, Gary Burton, Chuck Mangione, and Herbie Mann. He currently records and tours with Peter Gabriel, King Crimson, Stick Men, and The Crimson ProjeKCt.
Pete Levin
As a French Horn major, Pete earned a master’s degree from the Juilliard School. In the early ‘70s he switched to keyboards, becoming a synthesizer specialist in the New York City recording studio scene. Over the years, he has graced hundreds of jazz and pop recordings and performances by the likes of Miles Davis, Gil Evans, Jimmy Giuffre, Dave Brubeck, David Sanborn, Joe Louis Walker, Don Elliott, Freddie Hubbard, Annie Lennox, Charles Mingus, Jaco Pastorius and Wayne Shorter. He currently records with his organ trio with Dave Stryker and Lenny White.